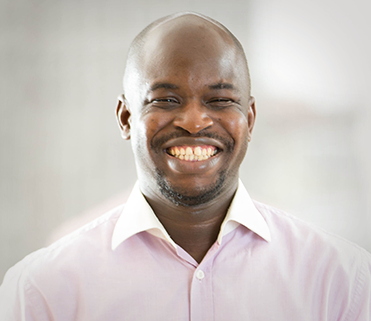 Oluwafemi (Femi) Sawyerr conducts economic analysis for projects related to retail electric rate design, transmission planning, asset valuation, and pricing for power purchase agreements. Since joining E3 in 2016, he has developed a model to calculate the potential cost savings of consolidating two cooperative utilities and to project the bill impacts by class to their customers. Femi also built a pro forma financial model to explore the economics of a proposed large-scale wind development in Wyoming.

Originally from Nigeria, Femi has a firsthand understanding of renewable energy and sustainable manufacturing in developing countries. He is interested in how challenges at the nexus of sustainability and energy, especially electricity, have local, national, and global consequences. Understanding these impacts is increasingly important as these nations seek to improve their infrastructure in a climate-constrained world.

Femi is also a passionate dancer who travels across the country taking classes and dancing with world-renowned professionals. He has performed in salsa and bachata routines in Ann Arbor, Michigan; Cincinnati; San Francisco; and Reno, Nevada—in competitions, in performances, and just for fun.

As part of its 2019 Integrated Resource Plan, Xcel Energy retained E3 to conduct two independent analyses to support its IRP: (1) an economy-wide study for the state of Minnesota examining what would be needed to meet deep decarbonization goals throughout the economy (e.g. 80% reductions by 2050); and (2) a portfolio optimization and reliability analysis for Xcel’s portfolio to examine the costs of meeting the utility’s carbon reduction goals (80% reductions by 2030; 100% carbon-free by 2050).

E3’s statewide pathways study provided Xcel with a novel perspective on future electricity loads in the context of an economy-wide carbon reduction effort, showing how decarbonization measures such as building and transportation electrification could lead to significant long-term increases in load. These findings were used to inform a sensitivity analysis conducted within Xcel’s internal IRP modeling.

E3 has provided comprehensive technical and advisory support to the Energy Division of the California Public Utilities Commission (CPUC) in its administration of the state’s IRP program, mandated by the passage of SB 350 in 2016.  E3 worked with CPUC staff to develop the structure of the IRP program including a three-year modeling cycle in which Staff prepares a system-wide plan that informs the California Independent System Operator (CAISO)’s annual Transmission Planning Process (TPP) and informs Load-Serving Entities integrated resource plans in alternate years.

E3 has helped the CPUC design an optimal “Preferred System Plan” for the combined utilities that incorporates the resource procurement plans of the LSEs and complies with the state’s clean energy policy requirements. In the 2020-2021 cycle, the policy requirements considered include a 60% RPS by 2030 and SB 100 by 2045, and a statewide greenhouse gas emissions target of 38 million metric tons (MMT) by 2030, while capturing the operational and reliability challenges encountered at high penetrations of variable renewable generation. E3 also supported the Energy Division’s development of a mid-term reliability order requiring the procurement of 11.5 GW of effective capacity by 2026. As part of this process, E3 evaluated dozens of scenarios reflecting alternative assumptions about load forecasts and electrification, resource costs, the availability of offshore wind and out-of-state wind, the ability of end-use loads to operate flexibly, and a variety of other input parameters.

E3 has provided procurement and rate-making advice to Wyoming’s Lower Valley Energy (LVE) since 2001. Our long-term procurement plans have carefully addressed LVE’s need to mitigate cost increases due to changes in either market prices of energy or Bonneville Power Administration’s rates. We have also helped LVE assess the merits of different rate structures and compare the value of building generation in its own service territory with the costs of building new transmission facilities to access alternative power sources. Most recently, we provided an independent evaluation of the costs and benefits of a potential merger with a neighboring co-op utility.