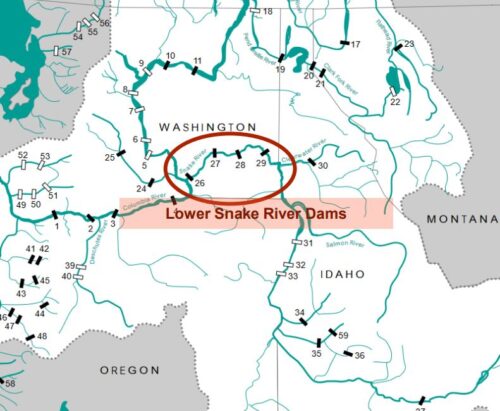 E3 recently completed an independent study of the value of the Lower Snake River dams (LSR dams) to the Northwest power system. These four dams, constructed on the Snake River in Eastern Washington between 1955 and 1975, provide reliability services and zero-carbon generation to the Northwest, including 3,500 megawatts of total capacity, 2,300 MW of firm peaking capability, and 900 average MW of zero-carbon energy each year. The long-term future of the dams is currently under consideration by the Biden administration and its Council on Environmental Quality (CEQ) for their potential impact on salmon and steelhead populations. Working under contract with the Bonneville Power Administration (BPA), E3’s report examines the resource needs and costs associated with replacing the power services that the dams provide. The E3 report concludes that replacing the energy services from the dams would come at substantial financial cost to the region.

As the Biden administration and regional stakeholders consider the future of the LSR dams, E3’s analysis shows the resources needs and costs for replacing the energy services from the four dams under various scenarios of clean energy futures. E3 used RESOLVE, our optimal capacity expansion and dispatch model, to identify least-cost scenarios of replacement resources for the LSR dams. E3’s report built on previous analysis of the Columbia River System Operations (CRSO) conducted by BPA, which examined scenarios for resource replacement. Using RESOLVE, E3 added least-cost optimization that includes updated resource pricing as well as emerging technologies while also factoring in reliability needs and increasingly aggressive decarbonization policies in the region. E3 modeled the Northwest energy system with the dams in place, re-optimized the system without the capacity from the LSR dams, and then calculated the difference, both in resources and in costs, between the scenarios.

The costs of breaching the LSR dams would be substantial. Breaching the four dams would require between 2,300 and 4,300 MW of replacement resources, costing between $415 million and $860 million each year by 2045. The net present value (NPV) cost over 50-years would be $11.2-19.6 billion. The replacement resource portfolios, in all scenarios but one, rely extensively on pre-commercial emerging technologies such as hydrogen combustion turbines and advanced nuclear reactors to replace the firm capacity the dams provide. A scenario in which the dams must be replaced with existing technologies only, while achieving zero electricity sector carbon emissions in the region by 2045, requires development of 12 GW of incremental wind and solar generation at an annual cost of $1-3 billion and an NPV cost of $42-77 billion.

E3’s report, as well slides from our presentation of the report, are available in full on both our site and on the BPA site. E3’s Arne Olson, Aaron Burdick, Dr. Angineh Zohrabian, Sierra Spencer, Sam Kramer, and Jack Moore contributed to the E3 study.