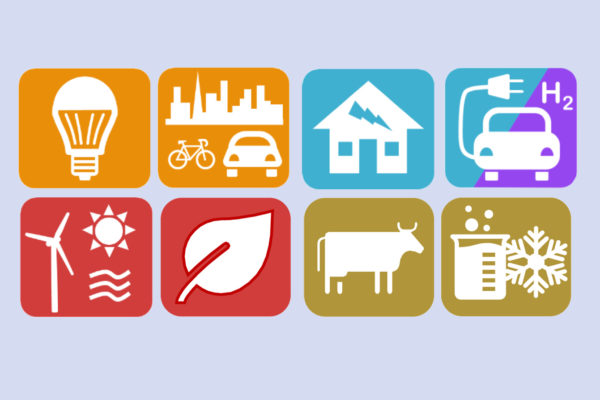 E3 worked with the World Resources Institute (WRI) to develop four scenarios of increasing ambition to reduce greenhouse gas (GHG) emissions across all sectors of the United States economy using E3’s US PATHWAYS and RESOLVE models. E3 collaborated with WRI to develop robust scenario definitions, collect publicly available data and assumptions, and create interactive spreadsheet results. The goal of the study was to understand the effect of high-impact federal policies on achieving 50% emissions reduction by 2030 and net-zero emissions by 2050. The analysis demonstrates the importance of key near-term building blocks, including: 1) aligning economics for customers and companies to adopt clean energy technologies; 2) aligning policy and institutions to remove barriers to technology deployment; 3) increasing consumer awareness and education to unlock higher levels of adoption; and 4) creating a transition plan for fossil fuel jobs to ensure a smooth transition.

E3 provided modeling and scenario analysis to support the US Climate Alliance’s 2021 Annual Report. The report highlights the progress Alliance members have already made toward reducing greenhouse gas (GHG) emissions, and using E3’s modeling, details multiple scenarios of Alliance-wide GHG emissions through 2050. E3 evaluated Alliance-wide GHG emissions through 2050 using E3’s PATHWAYS and RESOLVE models. The GHG emissions scenarios E3 developed for the Alliance highlighted the gap between the GHG reductions that would be possible with proposed state and federal policies and the reductions necessary to meet established federal targets. E3 also modeled the emissions impacts of the collective actions that would help bridge that gap.

E3 is supporting NYSERDA in its analysis to inform the Climate Action Council’s Scoping Plan. E3 has developed scenarios showing how New York could achieve carbon neutrality as outlined in the Climate Leadership and Community Protection Act (CLCPA). This work includes a detailed analysis of buildings, transportation, industry, electricity generation, non-combustion, low-carbon fuels, and negative emissions using E3’s suite of modeling tools (PATHWAYS, RESOLVE, and RECAP) and parallel modeling efforts at NYSERDA. E3 also assessed the economy-wide cost of decarbonization and compared it to the societal benefits of reduced greenhouse gas emissions and monetized benefits of improved air quality through reduced combustion. E3’s work includes detailed modeling of the CLCPA electric sector targets, including the 70×30 and 100×40 goals as well as technology-specific targets such as the 9 GW offshore wind target.

E3 was retained by three of California’s largest electric utilities – Southern California Edison (SCE), Sacramento Municipal Utility District (SMUD), and the Los Angeles Department of Water and Power (LADWP) – to explore the consumer costs and emissions reduction potential associated with the electrification of California homes. The study examines costs, savings, and emissions for electric and gas appliances in six different home types in geographical areas covering over half the state’s population. Unlike prior studies, it closely evaluates the consumer cost perspective on building electrification and quantifies GHG emissions savings by home type. E3 found that building electrification would deliver lifecycle cost savings for most home types in the study area. For homes with air conditioning – about 80 percent of the total – the economics are particularly strong: all new construction homes and the vast majority (84 percent) of existing single-family homes with A/C would save by going all-electric. E3 also found that electrification would significantly reduce greenhouse gas emissions from homes – starting today. For example, a Sacramento home built in the 1990s would immediately cut its GHG emissions nearly in half by switching to all-electric appliances; by 2050, with a significantly cleaner electric grid, the GHG savings would grow to over 80 percent (and more, if California achieves carbon neutrality).

E3 supported the development of Maryland’s statewide climate plan in collaboration with the Regional Economic Studies Institute (RESI) at Towson University. E3 developed a Maryland-specific PATHWAYS model for the project to calculate the costs and emissions reduction potential of various measures across the state’s economy, as well as the timeframes in which they would occur. In the project’s first phase, E3 developed a reference emissions case under existing state energy policies that was presented to the Mitigation Working Group of the Maryland Commission on Climate Change; in the second phase, E3 evaluated deeper GHG reduction scenarios with additional and more aggressive measures. The state’s draft climate plan, released by the Maryland Department of the Environment (MDE) in October 2019, encompassed more than 100 climate-saving measures – including investments in efficiency and renewables, adoption of electric vehicles, and better management of farms and forests – to reduce GHG emissions 44 percent below 2006 levels by 2030. The final plan is forthcoming in early 2020.

E3 worked with the Oregon Department of Environmental Quality (DEQ) to evaluate the economic impacts of adopting a carbon market in Oregon, per the directive of the State Legislature (SB 5701). E3 performed a detailed literature review of cap and trade programs and impacts across North America and Europe. We also developed an economic analysis of Oregon’s climate policies, including an estimate of the potential macroeconomic impacts of cap and trade in Oregon. E3 evaluated two categories of climate policies: (1) ‘complementary policies,’ which are the policies that drive GHG emissions reductions outside of the carbon market (e.g. the renewable portfolio standard and energy efficiency programs), and (2) different configurations of a future carbon market. E3 modeled the complementary policies in the energy-accounting model LEAP (Long-range Energy Alternatives Planning system), and the impacts of the carbon market using the IMPLAN macroeconomic model. The results of this study were presented to Oregon stakeholders in January 2017, and the Oregon DEQ presented the study results to the Oregon Legislature for consideration in February 2017.

E3 is supporting the New York State Energy Research and Development Authority (NYSERDA) in developing a detailed GHG analysis to quantify the infrastructure and policy changes necessary to meet state climate and energy goals. We are evaluating the GHG and cost implications of a variety of scenarios that are consistent with New York’s goal of reducing statewide GHG emissions by 40 percent below 1990 levels by 2030 and 80 percent below 1990 levels by 2050. In this work, E3 developed a user-friendly PATHWAYS model on the LEAP software platform for NYSERDA, as well as other modeling tools to support evaluating costs and options to decarbonize the electricity sector.

E3 has been a resource to the Department of Energy’s (DOE’s) Technical Assistance to States program through Lawrence Berkeley National Laboratory since 2008. Our projects help state governments better understand how to implement energy efficiency programs and how to make them cost-effective. E3 has advised utility commissioners and senior policy staff in Pennsylvania, Georgia, South Dakota, Illinois, Arizona, and other states on major aspects of their program designs. We provide accurate information, guidance, and background based on our knowledge of various states’ decisions, and share our expertise in standard industry practice.

E3 worked with the Southern California Gas Company (SoCalGas) to evaluate the potential of decarbonized pipeline gas fuels and the existing pipeline infrastructure to help meet California’s long-term climate goals. “Decarbonized pipeline gas” refers to gaseous fuels—including biogas—with a net-zero or very low GHG impact. E3 used its PATHWAYS model to evaluate two scenarios, one with heavy electrification of buildings and vehicles and one with a mix of electrification and decarbonized pipeline gas. Both were found capable of meeting the state’s 2050 climate goals with comparable total costs within the ranges of uncertainty that we evaluated. The results of the study suggest that the use of decarbonized gas distributed through the state’s existing pipeline network would complement a low-carbon electrification strategy. SoCalGas has used the results of this study to inform its energy and climate policy positions in California.

E3 supported the California Air Resources Board (CARB) in developing an updated “Scoping Plan” strategy for achieving California’s 2030 greenhouse gas target. California Senate Bill 32 (Pavley, 2016) requires the state to reduce greenhouse gas (GHG) emissions 40% below 1990 levels by 2030. E3’s analysis evaluated the GHG and cost implications of different 2030 scenarios that are consistent with the state’s current policies and GHG target. For this project, E3 updated the California PATHWAYS model to reflect scenarios and input assumptions requested by the CARB. The model results were translated into inputs to a macroeconomic model (REMI) in analysis performed by the CARB to evaluate impacts to statewide economic growth and jobs. E3’s study results were presented in public stakeholder workshops and are reflected in the final Scoping Plan published in November 2017.

The California Air Resources Board, California Energy Commission, California Public Utilities Commission, California ISO, and governor’s office engaged E3 to evaluate the feasibility and cost of potential 2030 GHG targets. We focused on emission reduction strategies through 2030, with an eye toward meeting the state’s 2050 GHG reduction goal. Using our PATHWAYS model, we developed several scenarios that varied the mix of low-carbon technologies and the timing of deployment. PATHWAYS is a stock-and-flow model that encompasses the entire state economy with detailed representations of the building, industrial, transportation, and electricity sectors. E3 team members briefed Gov. Jerry Brown and members of the legislature on the results. Our work informed the governor’s Executive Order B-30-15, which calls for a 40 percent reduction in statewide GHG emissions by 2030 relative to 1990 levels. California agencies are using our results in ongoing implementation analysis of the state’s climate goals.